As part of our commitment to promoting equality in sporting opportunities we recognised the limited number of opportunities people with a physical disability had to take part regulary in team sports, and those opportunities which did exist where generally located in city locations meaning participants from country areas had to travel long distances to take part. To address this problem in 2016 Powered By Sport launched our piorneering Inline Sledge Hockey project.

Inline sledge hockey is a dry land wheeled version of Ice sledge hockey (now called Para Ice Hockey). Para Ice Hockey is a sport that was designed to allow participants who have a physical disability to play the game of ice hockey. Para ice hockey was invented in the early 1960s in Stockholm, Sweden, at a rehabilitation centre. It is currently one of the most popular sports in the Winter Paralympic Games.

In 2015 Powered By Sport launch “Team Ireland Inline Sledge Hockey Club” From researching the internet we discovered the only other place that had a team which played Inline Sledge Hockey was in France. So in March 2016 we welcomed Angers Hawks to Northern Ireland for the first ever Inline Sledge Hockey European Cup. Both teams competed over 3 days in a best of 3 games event. 2 of these games were held in The Rink Sports Arena Portadown and the 3rd game was held in the Aurora Leisure Centre in Bangor where local interest in starting such a team had been generated. Team Ireland & Team France we welcomed to Stormont by local politicians to celebrate this unique event. Later in 2016 Team Ireland travelled to France in a return competition in Angers.

During 2017 Powered By Sport has been involved in research & development in designing a superior functional sled system. In March 2018 we announced our ambition to setup two other teams in Ireland, with a team newly formed in Bangor Northern Ireland, and another in Mayo Republic of Ireland. 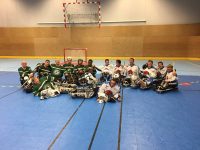 Powered By Sport is the new trading name adobted by our charity Love Hockey Ireland. We were formed in 2010 and are fully registered with the Charities Commission of Northern Ireland: Charity Num: NIC102273

Do you believe sport has the power to make a positive impact on society? Are you looking to get involved in something positive?

We have lots of different opportunities to suit your skills and the time you can commit. Please get in touch today and we will show you are ambitions and our focused opportunities. Then with your help can help us make a difference.